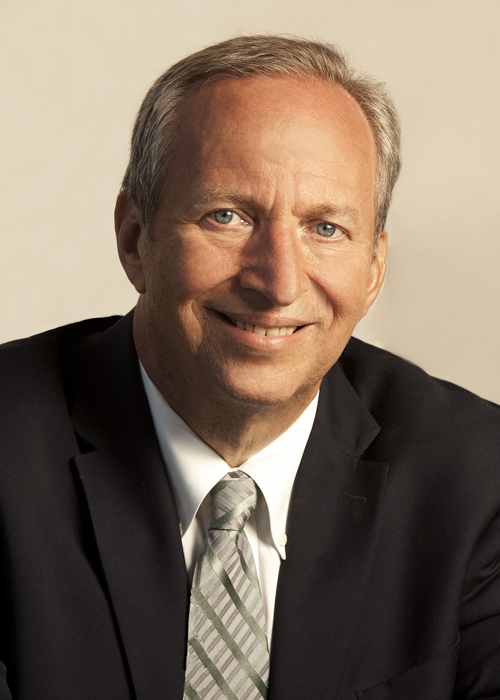 Lawrence Henry Summers (born November 30, 1954) is an American economist, former Vice President of Development Economics and Chief Economist of the World Bank (1991–93), senior U.S. Treasury Department official throughout President Clinton's administration (ultimately Treasury Secretary, 1999–2001), and former director of the National Economic Council for President Obama (2009–2010). He is a former president of Harvard University (2001–2006), where he is currently () a professor and director of the Mossavar-Rahmani Center for Business and Government at Harvard's Kennedy School of Government.

Born in New Haven, Connecticut, Summers became a professor of economics at Harvard University in 1983. He left Harvard in 1991, working as the Chief Economist at the World Bank from 1991 to 1993. In 1993, Summers was appointed Under Secretary for International Affairs of the United States Department of the Treasury under the Clinton Administration. In 1995, he was promoted to Deputy Secretary of the Treasury under his long-time political mentor Robert Rubin. In 1999, he succeeded Rubin as Secretary of the Treasury. While working for the Clinton administration, Summers played a leading role in the American response to the 1994 economic crisis in Mexico, the 1997 Asian financial crisis, and the Russian financial crisis. He was also influential in the Harvard Institute for International Development and American-advised privatization of the economies of the post-Soviet states, and in the deregulation of the U.S financial system, including the repeal of the Glass-Steagall Act.

Following the end of Clinton's term, Summers served as the 27th President of Harvard University from 2001 to 2006. Summers resigned as Harvard's president in the wake of a no-confidence vote by Harvard faculty, which resulted in large part from Summers's conflict with Cornel West, financial conflict of interest questions regarding his relationship with Andrei Shleifer, and a 2005 speech in which he suggested that the under-representation of women in science and engineering could be due to a "different availability of aptitude at the high end", and less to patterns of discrimination and socialization.

After his departure from Harvard, Summers worked as a managing partner at the hedge fund D. E. Shaw & Co., and as a freelance speaker at other financial institutions, including Goldman Sachs, JPMorgan Chase, Citigroup, Merrill Lynch and Lehman Brothers. Summers rejoined public service during the Obama administration, serving as the Director of the White House United States National Economic Council for President Barack Obama from January 2009 until November 2010, where he emerged as a key economic decision-maker in the Obama administration's response to the Great Recession. After his departure from the NEC in December 2010, Summers worked in the private sector and as a columnist in major newspapers. In mid-2013, his name was widely floated as the potential successor to Ben Bernanke as the Chairman of the Federal Reserve, though Obama eventually nominated Federal Reserve Vice-Chairwoman Janet Yellen for the position. As of 2017, Summers retains his Harvard University status as former president emeritus and Charles W. Eliot University Professor. He also regularly writes opinion columns for ''The Washington Post''. Provided by Wikipedia
Showing 1 - 2 of 2 for search: 'Summers, Lawrence H', query time: 0.01s
Search Tools: Get RSS Feed —