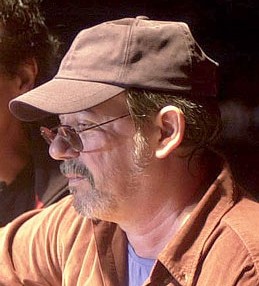 Silvio Rodríguez Domínguez (born 29 November 1946) is a Cuban musician, and leader of the nueva trova movement.

He is widely considered Cuba's best folk singer and arguably one of Latin America's greatest singer-songwriters. Known for his intellectual, highly eloquent and symbolic lyrics, his songs are iconic elements of Latin American left-leaning intellectual culture. Many of his songs have become classics in Latin American music, such as "Ojalá", "Playa Girón", "Unicornio", "Sueño con Serpientes", "Vamos a andar," and "La maza". Among his other well-known songs are political anthems like "Fusil contra fusil" and "Canción del Elegido", and poetic melodies like "A donde van" and "Noche sin fin y mar". He has released over 20 albums.

Rodríguez, musically and politically, is a symbol of the Latin American left. His lyrics are notably introspective, while his songs combine romanticism, eroticism, existentialism, revolutionary politics and idealism. As a humanist, his songs often bespeak a secular worldview, where humanity must make the best of this world. He has been referred to as "Cuba's John Lennon." Provided by Wikipedia
Showing 1 - 5 of 5 for search: 'Rodriguez, Silvio 1946-', query time: 0.03s
Search Tools: Get RSS Feed —