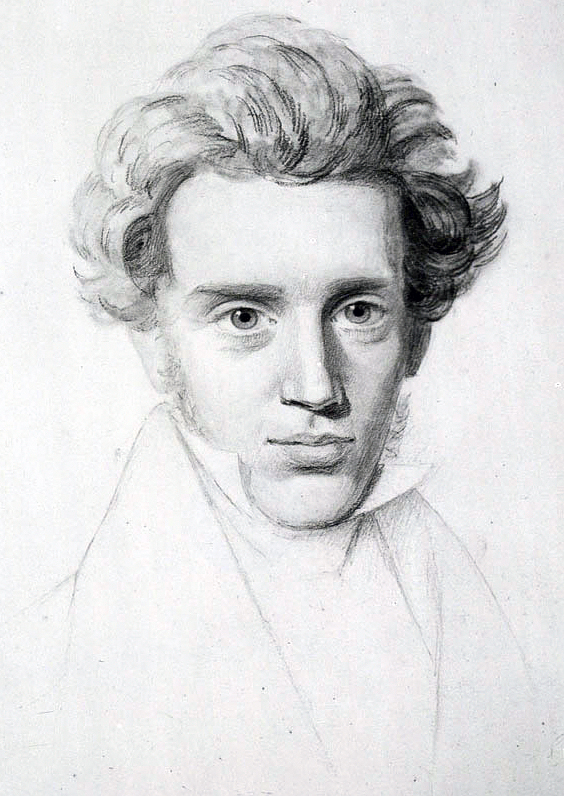 Søren Aabye Kierkegaard ( , , ; 5 May 1813 – 11 November 1855) was a Danish theologian, philosopher, poet, social critic, and religious author who is widely considered to be the first existentialist philosopher. He wrote critical texts on organized religion, Christianity, morality, ethics, psychology, and the philosophy of religion, displaying a fondness for metaphor, irony, and parables. Much of his philosophical work deals with the issues of how one lives as a "single individual", giving priority to concrete human reality over abstract thinking and highlighting the importance of personal choice and commitment. He was against literary critics who defined idealist intellectuals and philosophers of his time, and thought that Swedenborg, Hegel, Fichte, Schelling, Schlegel, and Hans Christian Andersen were all "understood" far too quickly by "scholars".

Kierkegaard's theological work focuses on Christian ethics, the institution of the Church, the differences between purely objective proofs of Christianity, the infinite qualitative distinction between man and God, and the individual's subjective relationship to the God-Man Jesus the Christ, which came through faith. Much of his work deals with Christian love. He was extremely critical of the doctrine and practice of Christianity as a state-controlled religion like the Church of Denmark. His psychological work explored the emotions and feelings of individuals when faced with life choices.

Kierkegaard's early work was written using various pseudonyms to present distinctive viewpoints interacting in complex dialogue. He explored particularly complex problems from different viewpoints, each under a different pseudonym. He wrote many ''Upbuilding Discourses'' under his own name and dedicated them to the "single individual" who might want to discover the meaning of his works. Notably, he wrote: "Science and scholarship want to teach that becoming objective is the way. Christianity teaches that the way is to become subjective, to become a subject." While scientists can learn about the world by observation, Kierkegaard emphatically denied that observation alone could reveal the inner workings of the world of the spirit.

Some of Kierkegaard's key ideas include the concept of "subjective and objective truths", the knight of faith, the recollection and repetition dichotomy, angst, the infinite qualitative distinction, faith as a passion, and the three stages on life's way. Kierkegaard wrote in Danish and the reception of his work was initially limited to Scandinavia, but by the turn of the 20th century his writings were translated into French, German, and other major European languages. By the mid-20th century, his thought exerted a substantial influence on philosophy, theology, and Western culture in general. Provided by Wikipedia
Showing 1 - 20 of 71 for search: 'Kierkegaard, Sören Aabye, 1813-1855', query time: 0.09s
Search Tools: Get RSS Feed —