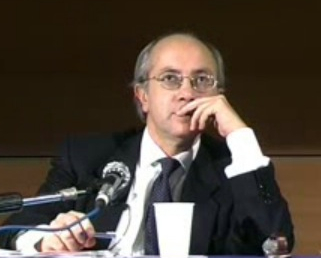 Roberto Esposito is an Italian philosopher, who is important for his work in biopolitics.

Roberto Esposito was born in Piano di Sorrento where he graduated at the University of Naples 'Federico II'. He currently teaches Theoretical Philosophy at the Scuola Normale Superiore in Italy. He was Vice Director of the Istituto Italiano di Scienze Umane, Full Professor of Theoretical Philosophy, and the coordinator of the doctoral programme in Philosophy until 2013. For five years he was the only Italian member of the International Council of Scholars of the Collège International de Philosophie in Paris.

His 2012 monograph, ''[https://www.amazon.com/Living-Thought-Actuality-Philosophy-Cultural/dp/0804781567 Living Thought. The Origins and Actuality of Italian Philosophy]'' (trans. Zakiya Hanafi, Stanford UP, 2012), is dedicated to Italian philosophical thought, and aims at creating a historical and theoretical background for the definition of the notion of "Italian Theory".