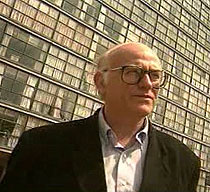 Roger Bartra Murià (born November 7, 1942 in Mexico City) is a Mexican sociologist and anthropologist, recognized as one of the most important contemporary social scientists of Latin America.

Bartra, son of Spanish Civil War refugee writer Agustí Bartra and Anna Murià, is well known for his work on Mexican identity in ''The Cage of Melancholy. Identity and Metamorphosis in the Mexican Character'', his social theory on ''The Imaginary Networks of Political Power'' and, recently, for his anthropo-clinical theory of the “exocerebro” (exo-brain), that argues that the brain is partly constructed by its “cultural prostheses”, external socio-cultural elements that complete it.

Trained as an anthropologist in Mexico, Bartra earned his doctorate in sociology at La Sorbonne and he is an Emeritus Researcher at Mexico´s National Autonomous University, where he has worked since 1971; in 1985 he was awarded the Guggenheim Fellowship. He is also Honorary Research Fellow at the Birkbeck College of the University of London. Provided by Wikipedia
Showing 1 - 7 of 7 for search: 'Bartra, Roger, 1942-', query time: 0.09s
Search Tools: Get RSS Feed —